Thirteen students and tutor Encarnita took part in a day of Spanish culture, language and food on Monday 19th August.

We were served hot chocolate as part of a copious, traditional Spanish ‘desayuno’, we then learnt some useful phrases and aspects of culture, including ‘la sobremesa’ and the significance of the mantilla and peineta  as demonstrated by Encarnita.

Ian then delivered a short tribute to Federico García Lorca the most influential Spanish writer of the 20th Century and we all participated in an enthusiastic rendering of his song ‘La Tarara’.

A delicious and generous lunch was followed by more conversational Spanish, including useful vocabulary for the doctor’s surgery.

Thanks to all who made this event possible.

It is intended to include an illustrated talk on Spanish birds, a Spanish box origami workshop and a sangria demonstration at further sessions, details will appear here when they have been arranged. 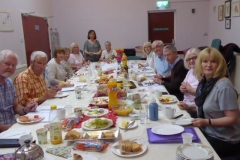 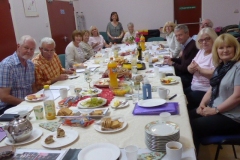 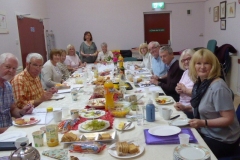 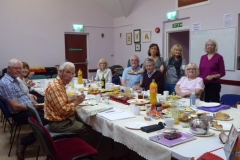